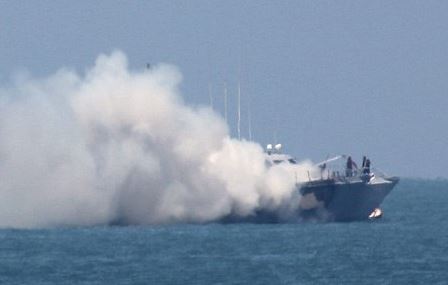 Extremists loyal to the Islamic State in Egypt have attacked a naval patrol ship in the Mediterranean Sea, causing it to burst into flames.

The Egyptian military said earlier a coastguard vessel had exchanged shots with militants just two miles off the coast of northern Sinai, an area bordering Israel and the Gaza Strip.

There were no fatalities among the vessel’s crew in the shootout with the terrorists, according to a Facebook message posted by military spokesman, Brigadier General Mohammed Samir.

1 Comment on Terror hits the high seas: Egyptian navy vessel erupts in fireball as ISIS carries out its first rocket strike on patrol ship in the Med