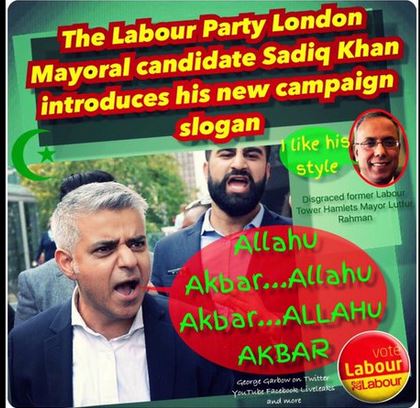 Labour was plunged into a fresh race row last night over an extraordinary slur against moderate Muslims by its London mayoral candidate.

Sadiq Khan was branded unfit to be London Mayor after it emerged that he had described moderate Muslim groups as ‘Uncle Toms’ – a notorious racial slur used against black people to suggest that they are subservient to whites.

The incendiary claim emerged in a 2009 interview with Iranian-backed Press TV, when Mr Khan was ‘minister for community cohesion’, in charge of Government efforts to stamp out extremism.

The revelation is a major blow for Mr Khan, who has faced a string of claims about his past dealings with Muslim extremists during the bitter campaign to succeed Boris Johnson.

The Muslim “block vote” is such a formidable electoral force, that, for the Islamists to dominate a city it does not need to have a Muslim majority.

The greatest prize, of course, is London itself.

The capital is about to elect its first Muslim Mayor, Sadiq Khan.

Polls predict that Khan, who is also the Labour MP for Tooting, will win by a larger majority than either of his predecessors, Ken Livingstone and Boris Johnson.

In 2004, he supported incorporating the Sharia law into the British legal system: “There are some . . . uncontroversial areas of Islamic law which could easily be applied to the legal system . . . in the UK.”

What Khan had in mind by “uncontroversial” was the legitimisation of polygamy, by altering inheritance tax law to allow husbands to divide their estates between several wives while enjoying the tax exemption normally applicable to a single spouse.

He called this “applying common sense,” but it was yet another step towards de facto recognition of polygamy by the law.

Muslims have long been claiming welfare benefits for multiple wives; the only condition is that they must have married them abroad.

In 2007, Khan questioned the need for the criminal law to be used to stop forced marriages, claiming that such “ghetto” legislation would stereotype the Muslims.

With friends like this, is Sadiq Khan fit to run London?

All eyes were on the coffin as the pallbearers made their way to the hearse. The old lady had been popular, and Balham Mosque was thronging with mourners paying their last respects.

Helping to carry the casket on its final journey was Sadiq Khan, the local Labour MP and now hot favourite to succeed Boris Johnson as Mayor of London, one of the most powerful and influential jobs in the country. With the funeral formalities out of the way, Khan switched effortlessly back into professional politician mode, working his way through the crowd in South London.

One figure whose hand he stopped to shake stood out: convicted terrorist Babar Ahmad, a man who has been blamed for inspiring a generation of extremists, including the gang behind the London bombings of July 7, 2005. The pair exchanged brief pleasantries before Khan moved on.