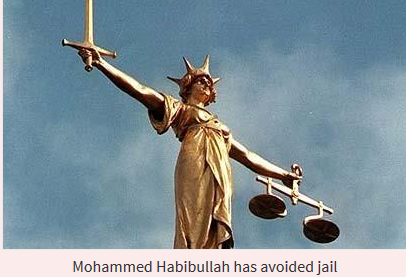 Judge Amjad Nawaz told him: “You have not only let yourself down but you have let your community down.”

He stressed it was an extremely serious offence and said: “You gave evidence saying you simply would not have done what you did because it was Ramadan and you would not have had those thoughts.”

The actions of Habibullah, said the judge, had serious consequences for his victim who had been left “psychologically damaged”.

He added that before the offence it was clear Habibullah had been a man of “positive good character” who had given more than 25 years service to the Muslim community as an Imam but he had behaved inappropriately when he had been alone with his victim in a room.

Habibullah was given a six month jail term suspended for 18 months, placed on supervision for 18 months and told he must register as a sex offender for the next seven years.